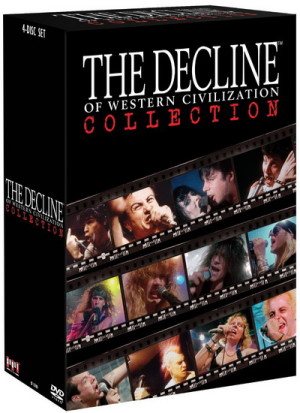 I believe I saw the first of these documentaries on the old Night Flight program on USA Network. And it freaked me out a little. It focused on early Los Angeles punk bands such as Black Flag, X, Fear, and The Germs. It was fierce and grimy, and a bit disturbing to your slightly-sheltered correspondent, who might have just gotten home from a Billy Joel concert, or whatever.

The director, Penelope Spheeris, made a sequel two years later, in 1983 — this time with heavy metal bands. It features the famous “Ozzy cooking bacon” scene, and the whole film is great fun. I probably saw it at the midnight movies, or possibly as a VHS rental. I can’t remember, but I do remember loving it.

I’ve never seen the third installment, and wasn’t even aware of its existence. It reportedly focuses on homeless punk rock kids in L.A. I’ve read that it’s fairly dark and powerful.

This much-anticipated box set is the first time these classic films have been available on DVD or BluRay. Legally, anyway. There’s also a fourth disc of outtakes, etc. It’s put together by Shout! Factory, which is run by some of the original Rhino Records folks. That means we’re in good hands! Check out the Amazon page here.