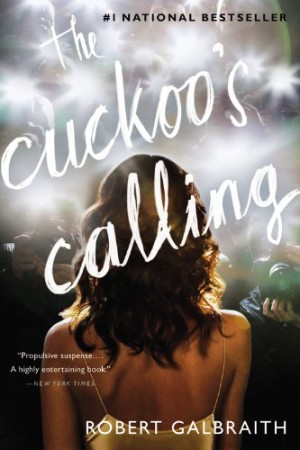 This is the latest addition to my Kindle. It’s a crime novel released a couple of years ago, by an unknown author. At first few people were paying attention, but the book quickly began generating a buzz. Here’s a perceptive reader review, posted shortly after the novel appeared:

This book is so well written that I suspect that some years down the road we will hear the author’s name is a pseudonym of some famous writer. Lots of description made one feel like another occupant in the scene. You could feel the weather, the tension, the pain, the atmosphere in the gatherings.

Nicely done, reader! As it turns out, “Robert Galbraith” is actually J.K. Rowling, author of the Harry Potter novels. At this point she’s released two additional books featuring London private investigator Cormoran Strike under the Galbraith name, and they’re reportedly gritty and grimy and built for an adult audience.

I’ve been intrigued from the start, but don’t like paying full-price for my books. I mean, what am I, Ted Turner? Finally, my patience paid off (once again) and I downloaded The Cuckoo’s Calling for just $2.99. As I type this, it’s still at that low price in the Kindle Store. Check it out, if you’re so inclined. I’m looking forward to it!