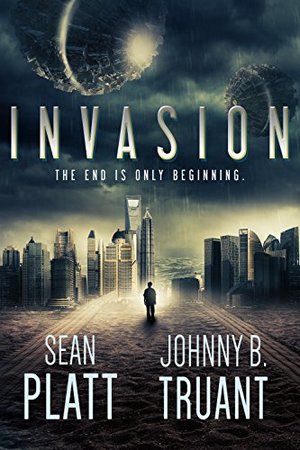 Hundreds of orbs are sailing through space, moving toward Earth. ETA: six days. Nobody knows what in the open-face hell is going on, but there’s no shortage of speculation and panic. The government has already been caught lying about what they know, and society is on the brink of collapse.

The family at the center of this adventure novel is attempting to get from New York City to a vacation home in the Colorado mountains, where they plan to hole up and hopefully ride out whatever is to come. You might find this difficult to believe, but they encounter quite a few problems along the way.

I read this one a couple of months ago, and had a great time with it. I like how the titular invasion is something ominous and threatening, but not actually happening until deep into the book. And even then… it’s not exactly clear what’s going on.

But there’s always book two… and three… and four. This is the first entry in the so-called Alien Invasion Series, which contains seven books. I plan to read them all, and own most of the novels already. This first installment is free today, and probably tomorrow. Oh, these guys know what they’re doing.

If this sounds like your kind of thing, I’m confident you won’t be disappointed.