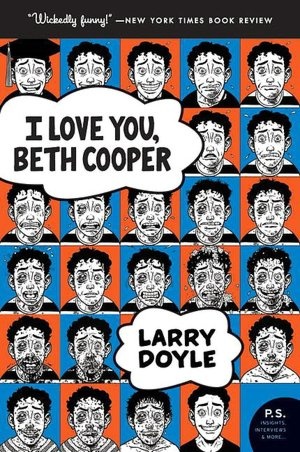 I bought the hardcover version of this book when it was a new release. Somebody I trusted suggested it, assuring me it’s my kind of thing. It’s currently upstairs on one of our shelves unread, dusty, and yellowing.

There’s no real reason for this, other than I buy ’em much faster than a read ’em. It’s still something I want to get to, eventually.

And now that I’ve bought a second copy for my Kindle, there’s a better chance of that actually happening. As I type this the novel is priced at $1.99, but who knows how long that will last? Amazon acts in mysterious ways. The Suggestaholic suggests you snag it without delay.

From the book’s description:

Denis Cooverman wanted to say something really important in his high school graduation speech. So, in front of his 512 classmates and their 3,000 relatives, he announced: “I love you, Beth Cooper.”  It would have been such a sweet, romantic moment. Except that Beth, the head cheerleader, has only the vaguest idea who Denis is. And Denis, the captain of the debate team, is so far out of her league he is barely even the same species. And then there’s Kevin, Beth’s remarkably large boyfriend, who’s in town on furlough from the United States Army. Complications ensue.