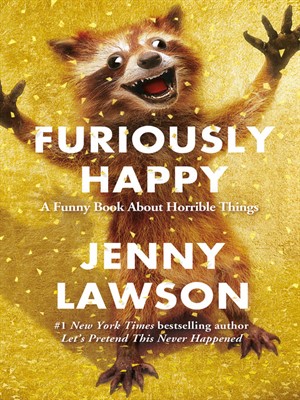 Jenny Lawson has a website that’s not unlike my own West Virginia Surf Report. She writes about her life in a humorous way, and has a biting sense of humor that I appreciate. The big difference between her site and mine? Hers is about a million times more popular.

But that’s OK. She works harder, is probably funnier, and managed to strike a nerve with people. I applaud her achievements. I don’t really get jealous of other folks’ success, I just beat myself up for not getting there too. I repeat certain phrases like “You’re a walking, talking piece of shit. Why don’t you just throw yourself into a fucking canyon, loser?” Life-affirming mantras like that.

In any case, this is Jenny’s second book. Both are memoirs, and both are huge bestsellers. To be honest, I had a little trouble with the first one. I started to read it, and stopped. But I think the brain chemicals were just mixing in some unfortunate way that day; sometimes the chemicals are not my friend. People I know and admire assure me the book is both hilarious and great. It remains on my Revisit Soon list.

And the second book is temporarily $3.99 for Kindle. I’m not sure if it’s a one-day thing, or what. But I’ve never seen the price this low, so snag it if you’re so inclined. I was all over it like a cheetah on a birdwatcher.