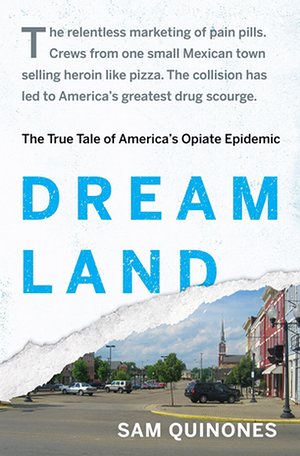 The author of this book was the guest on a recent episode of Marc Maron’s podcast, and I thought it was an odd choice. I still do, in fact. Maron generally interviews comedians, actors, and musicians. When he does have an author on as a guest, it’s usually a novelist. However, it turned out to be one of the best recent episodes of the show.

Sam Quinones is an investigative reporter, and Dreamland is the book he wrote about heroin, and how its use is now epidemic in America. He blames the pharmaceutical industry for aggressively peddling pain pills, the medical industry for choosing to treat symptoms instead of underlying problems (to save money, of course), and a group of people from a specific village in Mexico for marketing heroin in small cities “like pizza.”

It’s that last part that I found the most fascinating. Quinones claims that nearly everyone who lives in that Mexican village is involved, “including the mothers and daughters.” They move into a small U.S. city — like Huntington, WV, which is not far from where I grew up — and set up shop like Domino’s. They have a phone number you can call, and drivers who will deliver the drug straight to your door. It’s wild, and terrifying.

While I was listening to the interview, I went over to Amazon and added the book to my Wishlist. And today it’s $2.99. If you find the subject interesting, I don’t think you can go wrong with this one.