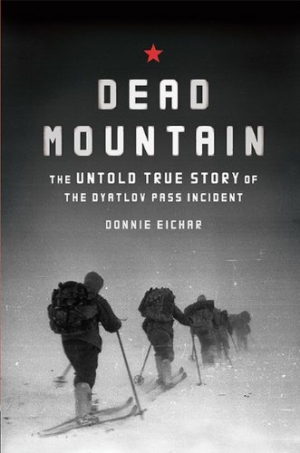 In February of 1959, in the old Soviet Union, nine college students departed for a challenging hiking excursion and never returned. What rescue workers found has been the subject of more than 50 years of speculation and debate. It’s one of Russia’s greatest unsolved mysteries.

The hikers’ bodies were located in random spots away from their camp, as if they’d scattered in a panic. Some were not wearing shoes, there were various causes of death, and one was missing a tongue. Also, there was evidence that their tent had been slashed with blades from the inside-out.

What circumstances could lead to such a scene? All nine students were elite hikers, with years of experience. Of course, there have been no shortage of theories. The most interesting involve a secret military exercise gone awry, and/or visitors from outer space.

There are several books about this incident, but Dead Mountain appears to be one of the few serious ones. The author traveled to Russia several times, where he examined original documents from the investigation, interviewed relatives of the deceased, and even spoke with a hiker who started out with the group but had to turn back because of illness. He also ventured into the mountains and visited the spot where the hikers set up camp.

I read this book a few months ago, and loved it. You get to know the students and their personalities. You travel with them by train at the beginning of their doomed excursion. Then you take part in the rescue mission. It’s the kind of thing that’ll stick with you. I recommend it highly, at any price. But today it’s $1.99 for Kindle. You simply can’t go wrong.

Please note: At the end of the book the author presents his own theory of what happened. I don’t know if I buy it, but it’s interesting. It also doesn’t detract from the overall story. This is a good one, my friends.