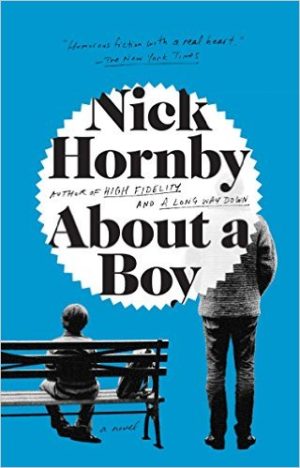 I believe everybody who’s ever worked in a record store has read Nick Hornby’s debut novel, High Fidelity. It’s a very funny book about a group of guys who, you know, work in a record store. They have a lot of pop culture knowledge, and strong opinions. They argue and bicker and make Top 5 lists, which they then argue and bicker about. The main character’s girlfriend has just left him, and it upsets him greatly that her new boyfriend has a subpar record collection.

Hornby’s second novel is About a Boy, and it concerns a perpetual adolescent (sensing a theme?) who lives in London, dates as many women as possible, and generally lives like an adrift 22 year old hipster, even though he’s now 36.

Then he starts seeing a woman with a troubled 12 year old son, and our hero finds himself in the improbable position of being a role model. He tries to help the kid grow up, even though he hasn’t fully grown up himself. It’s unclear who the Boy in the title is referencing. It could go either way.

This second book is also very funny, and charming as well. It was made into a successful movie, and later a TV series that I never saw. I’m fairly sure it’s Hornby’s biggest selling novel, and basically made him a literary star. I read it a long time ago, right after High Fidelity, but plan to revisit both books soon.