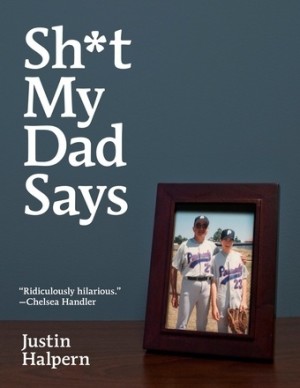 Back when I was writing my “shitty jobs” memoir, chasing a mainstream publishing contract and making myself even crazier than usual, my agent suggested I read a few similar books to see how others have approached the process. Loving the idea of taking a break from the endless rewrite chore, I took her up on it.

However, one of her suggestions was Shit My Dad Says. Seriously? I had an attitude about that book, and the author in general. I had to begrudgingly admit he was a funny writer, but his whole shtick bugged me. Ya know? He became world famous after opening a Twitter account and posting the supposed random “shit” his dad said around the house.

I believed it was all fake. I mean, it was pretty interesting how his dad apparently walked around mumbling his hilarity in less-than-140 character bursts. How convenient. A lot of it was funny, sure. But, it felt like a gimmick to me. The fact that I was struggling, and this dude was flying high had nothing to do with my attitude. I’m certain of it. Nothing at all.

But, I read the book, and loved it. It’s genuinely funny, and warm. There’s a lot of heart in this thing, and plenty of laughs. It’s the story of Halpern moving back in with his aging father, after years of being on his own. It’s really good, and his dad seems like a wonderful man. I was wrong, OK? Sheesh. I’m only flesh and blood here… Today the book is priced at $1.99 for Kindle, as is its follow-up, I Suck At Girls. Both are recommended.